He Still Loves You, Donna Karan

The following is a guest blog written by Gemma, (One name. Like Prince… not Madonna… at least that’s what she tells us) one of our loyal podcast listeners. She had some strong, detailed, and intelligent thoughts about Girl Meets World’s handling of Shawn and Angela and we wanted to help foster that kind of critical analysis. While we don’t necessarily agree with all of her points, (we’ll get into this next podcast) we think it’s important to share a variety of perspectives. If you’d like to write a guest blog for the site send us an email at gmwpodcast@gmail.com and we’ll look over what you have. Take it away Gemma.

OK, so the well hyped Girl Meets World episode Girl Meets Hurricane aired on June 19th 2015. In essence it uses Boy Meets World characters to its advantage, but pays little homage to them. Shawn Hunter went from not knowing what he’s supposed to be for Maya Hart to sitting in the “daddy chair.” Cory Matthews was frantically warning Shawn about the arrival of Shawn’s lost love Angela Moore like she was the Bubonic plague, even though Cory made efforts to be friends with her in Boy. The use of both Shawn’s dad Chet Hunter’s ghost and Angela to promote Shawn and Katy Hart’s gender-biased, misogynistic [1], budding relationship was irresponsible and repugnant. It all pushes harder than Maya pushes Josh for something that hasn’t been developed at all. Show, don’t tell.

Shawn and Katy’s chemistry, despite their storyline making me question my allegiance to Boy, is good due to the phenomenal actors portraying these parts. Rider Strong slipped back into his role without a missed beat and Cheryl Texiera’s portrayal of Katy bursts with charm. Differently, Shawn and Angela in Boy had powerful chemistry from the start. Rider and Trina McGee (Angela) have the exact same spark and ease with each other fifteen years later.

Shawn and Angela were an engaging couple from the beginning or…. end, as it were. Their relationship began with an end and functioned as the antithesis to Cory and Topanga. Shawn and Angela’s love was complicated and they didn’t get any real ending (geez how many times can I use that word?) when Boy culminated like Cory and Topanga’s happy one. What did happen however wasn’t happy at all. Michael Jacobs (the co-creator of Boy, Girl and the kick-ass Dinosaurs) cites realism as reason for this because Cory and Topanga’s relationship is one in a million and needs an opposite. The problem with that reasoning is that no real relationship is a direct opposite to another – each is its own entity. If you look at Shawn and Angela’s relationship that way, they should have gotten a happy ending (I promise that’s the last time).

Therein lays the problem. Michael Jacobs refuses to view Shawn and Angela’s relationship as its own entity.

On its own, there was no indication that their relationship was going to end (alright, THIS is the last time) in Angela’s Ashes (Angela’s swansong in Boy) other than Shawn saying “Goodbye Angela” to himself after she leaves for Europe with her father for a year. While this can be viewed as an artistic choice because Shawn mentions earlier that saying goodbye would be the end, under NO circumstances does that actually establish that Shawn has broken up with Angela. 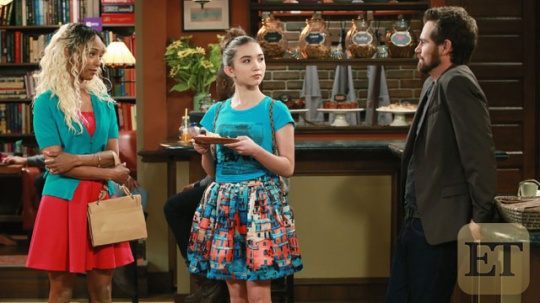 After Angela left in Boy the story is just over and NOTHING is explained in Hurricane. All she says to address why she and Shawn didn’t work out is “I wasn’t ready” and that’s crap based on Ashes and the preceding Angela’s Men episode of Boy. Everything that follows therefore doesn’t ring true and I’m not here for it, as it’s all a result of that UNTRUE statement. Angela WAS ready and so was Shawn. They had worked out issues Angela had with her mom leaving her and Shawn trusted the relationship and was supportive of her decision to leave.

Part of what I’m not here for is the revelation in Hurricane that Angela is married. This, while realistic based only on time passing, only truly functions as cock-blocking [2] any chance of reconciliation because it’s Disney and Angela’s not going to leave her husband for Shawn… how convenient. Ironically the ramifications of that very thing were addressed on Boy with the divorce of Topanga’s parents. Additionally, why wouldn’t Topanga, Angela’s former best friend, not even know that Angela got married? Even if their friendship faded she’d probably be invited to the wedding.

In Girl we’re ultimately left with the realization that Angela never returned after she went to Europe, but based on how the characters were last committed to each other, that’s crap too! We still don’t know what happened to that commitment because neither Hurricane nor any other Girl episode where Angela is mentioned, inaccurately and callously mind you [3], sheds light on anything between Ashes and the present. Yes long distance is hard; yes Angela could’ve met a guy in Europe named Paulo, Enrique or Miloš and yes “relationships end” as Shawn said in Hurricane, but not without reason. NOT “out of nowhere on a sunny day.” It appears Michael Jacobs and Hurricane’s writer Matthew Nelson wants us to guess what happened. Nothing would have based on the characters’ motivations in Boy. Angela WOULD HAVE returned. 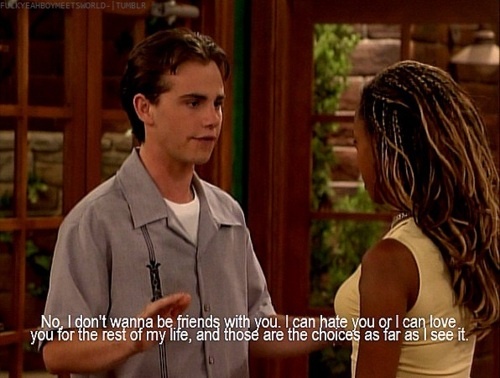 Shawn and Angela and Cory and Topanga had two completely different journeys and despite attempts at making them antithetical, they both could have REALISTICALLY ended up at the same destination because both couples have one common element – love. In the case of Shawn and Angela as far as I’m concerned as of Girl Meets Hurricane they still have it because nothing has explained where that love went, but Girl uses time and distance as reasons for the relationship to have ended and for the love to have dissipated. Those aren’t reasons. Time and distance are measurable things that in and of themselves cannot jettison love, any behaviours that stem from it, or any other immeasurable emotion [4]. All they can do is prevent it from growing.

The resolution for Shawn & Angela ultimately fails miserably, but I don’t think any brass at Girl Meets World (or maybe even Disney Channel) ever intended for it to succeed.

Am I asking for too much in the exposition I desire? Maybe; I am not however asking for anything to change. I realize Girl is about the next generation (Angela relates to Maya the same way Shawn does having been left, so it still could be about them even if she and Shawn are together). All I am pointing out is why there’s no reason why Shawn & Angela shouldn’t have been and still could be.

I, like Cory Matthews, am hopeful that they will be.

Maybe if I don’t hope for too much, but let myself hope for one thing, it might actually happen.

[1] It was never implied in Boy Meets World that Johnathan Turner needed a woman to help him with Shawn. That implication looms LARGE in Girl Meets World. Shawn has already bought two things for Maya (the locket in Girl Meets Master Plan and a new wardrobe in Hurricane) much to the gratitude of her lowly waitress mother Katy whom the show is portraying pretty vigorously as poor and downtrodden in comparison and shows Shawn as a rescuer.

[2] No other character from Boy has made an offhand comment on Girl about being married, that’s never mentioned again, if they weren’t already. Angela’s marriage and similarly Stewart Minkus’ are just being used as plot devices.

[3] Although credit should be given to the writers for saying something nice about the relationship earlier in this scene. The ONLY nice thing.

[4] If they could than Cory and Shawn wouldn’t have been able to pick up where they left off after thirteen years as they seemingly did in Home For The Holidays.

Comments on: "He Still Loves You, Donna Karan" (3)